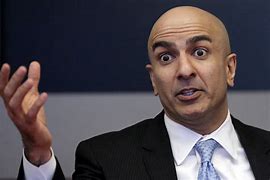 See more of the story

The nation’s largest banks should either safeguard themselves with far more of their own money — or they should break up.

That was the message from Neel Kashkari, president of the Minneapolis Fed, who on Wednesday unveiled his long-awaited plan to protect the U.S. economy from a financial crisis that would trigger another deeply unpopular bailout.

The steps in what Kashkari dubbed the “Minneapolis Plan” are less obvious than breaking up the big banks. But by forcing banks to back up their businesses with less debt and far more ownership investment, it would have the same effect: Megabanks such as U.S. Bancorp and Wells Fargo likely would downsize to avoid the rules.

“We will have fewer megabanks, and there will be far less concentration in the banking system,” Kashkari said at the Economic Club of New York. “We expect that community banks will thrive and midsize banks will make up a far larger share of the overall system.”

The plan, which is only a recommendation, would reduce the chance of a bailout in the next 100 years to less than 10 percent, Kashkari said, but first it must win congressional approval.

Congress is in flux after the election. President-elect Donald Trump has sent conflicting signals. He has argued the banking industry was never held to account for the financial crisis, but he also promised to dismantle the Dodd-Frank Act, the 2010 law designed to prevent a bailout like the one in 2008.

Banks quickly rejected his idea. “For those looking to accelerate economic growth and job creation, tripling bank capital levels — already double from pre-crisis levels — will make it much harder to meet those goals,” said Laena Fallon, a spokeswoman for the Financial Services Roundtable.

Kashkari acknowledged the plan comes at a price: Banks that hold more capital cannot lend as much. The Minneapolis Fed estimates the trade-off is worth it. A financial crisis typically exacts a permanent cost equal to the nation’s economic output for a year and a half, Kashkari said. The negative impact of higher capital requirements on banks would cost about 40 percent of economic output.

Americans must decide, Kashkari said, whether they are comfortable with the next financial crisis playing out like the last one.

“If you think once every 50 years is acceptable, fine, let’s stay the course,” he said. “I don’t think it’s acceptable. I think the devastation from the financial crisis, we’re still paying it, not just in terms of lost jobs and output. But I look at the polarization of the country today, and I feel like it is a direct outcome of the financial crisis. If we can avoid these types of scenarios, my gut tells me it’s worth paying some insurance for that.”

Kashkari was the Bush administration Treasury official in charge of the bailout in 2008. He saw it as a necessary evil, but one worth avoiding.

“It violated core American beliefs that if you take a risk, you bear the consequences for that risk,” he said. “That’s been passed down from generation to generation, and we had to violate that belief to stabilize the financial crisis. When you violate the core beliefs of a society, it leads to the big anger.”

Banks don’t just collect deposits and lend the money to other customers. They borrow money to lend it out — a lot more than they used to. American banks in the 1800s often held capital equal to 50 percent of assets, meaning they could absorb huge losses without becoming insolvent and needing a bailout.

Equity capital at banks — the shareholders’ investment — shrank over the years and by the time the financial crisis arrived in 2007, the 10 largest banks in the country had equity capital equal to only 2.8 percent of their assets, according to the Federal Deposit Insurance Corp.

Lacking a cushion when the crash in home prices triggered the crisis, several of the nation’s largest banks either collapsed or had to be bailed out.

Since 2008, bank capital positions have improved. At the end of 2015, the biggest eight U.S. banks had an average capital ratio of 5.97 percent, according to the FDIC. That means that for every dollar loaned, 94 cents was financed by debt. Under Kashkari’s plan, any bank with more than $250 billion in assets would have to issue common equity equal to 23.5 percent of their assets, a massive increase.

The Minneapolis Plan also calls on the Treasury Department to certify that individual banks do not pose a systemic risk to the economy.

If a megabank cannot obtain such a certification, it will face even higher capital requirements after five years — up to 38 percent of assets. Kashkari said this would cause large banks to restructure and if they don’t, they will have so much capital they “virtually cannot fail.”

To try to address the concern that higher capital requirements will push risky lending to the shadow banking system — hedge funds, mutual funds and other nonbank finance companies — Kashkari proposed a tax on debt for nonbank financiers with more than $50 billion in assets. The tax would be 1.2 percent or 2.2 percent, depending on whether each entity is systemically risky.

“Our proposed tax will roughly level the playing field between banks and shadow banks by equalizing the cost of the funding so that activity doesn’t just move to a less-regulated segment of the financial system,” Kashkari said.

The final step in the proposal is regulatory relief for community banks, which play a vital role but face “unnecessary regulation,” Kashkari said.

“Banks with less than $10 billion in assets should be subject to a much simpler and less burdensome regulatory framework that reflects their relative lack of risk to the economy,” he said.

The plan will be open for a 60-day comment period. A final draft will be published in early 2017.

On Thursday, Kashkari will go on TV to pitch the plan, then be available to anybody who wants to talk about it, Democrats or Republicans, he said.

“We’re not in a position to lobby people,” Kashkari said. “But we want to inform people, we want to educate people and, at the end of the day, the public needs to decide.”