Jack in the box mascot 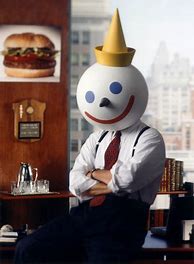 A lot of celebrities take in games at Dodger Stadium. That’s what happens when you have postseason games in Los Angeles.

But viewers were less interested in the famous names and more intrigued by a strange head that appeared behind home plate in the bottom of the first inning.

The giant head disappeared in the second inning before the TBS broadcast showed that it hadn’t exactly left the game.

So what was the big head supposed to be anyway? It certainly wasn’t the Dodgers’ mascot, as Los Angeles has never had an official mascot. Was he the Jack in the Box mascot, Jack Box? He certainly looks similar, but he’s not quite that mascot either.

Instead, it seems most likely that it was just a random fan who brought a bizarre head to wear to the game. For the unlucky fans behind him, he was simply an obstacle to the view of the game from their seats for half an inning.

The mystery of the big head got everyone wondering just who the big head might be. Here were some thoughts from Twitter.

Jack in the box mascot pic.twitter.com/AFJX6r6nm1

I glanced up and thought Yoko Taro was at the Dodgers game for a second. But no, it’s some other guy in a big, gray head behind home plate. pic.twitter.com/xNTZUc4g6H

What is with baseball head at the Dodgers Cardinals game? Can’t see anything but this character ? I’d be pissed if sitting behind Mr Met on vacation pic.twitter.com/M98opRfpAN

Is this big round head fan in the stands a usual at Dodgers games or is this a special occasion?